Back on the 10th October 2015, England faced Uruguay at the City of Manchester Stadium. The game was a “dead rubber” meaning regardless of the result neither team could progress to the knock out stages and the whole of the RFU and English Rugby now faced the humiliation of going out in the group stages of a World Cup hosted in their own back yard.

The game ended 60-3 to England but ultimately this wouldn’t be the answer everyone was looking for, as Uruguay were at best a team of amateurs and the RFU set out to look for a replacement for Stuart Lancaster and his coaching staff.

Lancaster’s reign as England Head Coach had been solid but not spectacular, having frustratingly lost the 2013, 14 and 15 Six Nations Championships on an equal number of points in the table but not enough points on the field. Ultimately the team needed that little bit extra to turn good into great. 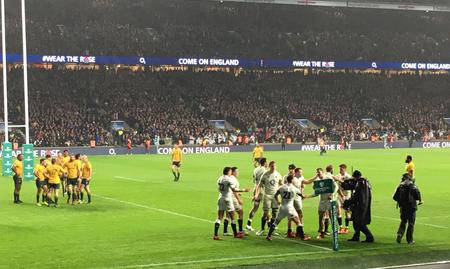 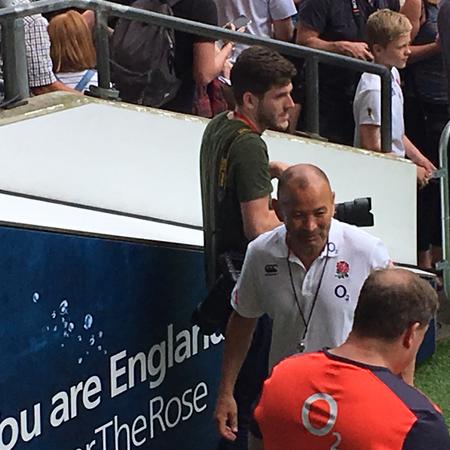 To find out more aboutHR Strategy Pro‘Ignition’and how we are #UnlockingPeoplePerformance across business and sport, please click here.

Pictured: Eddie leads the way and shows the players how its done! (England Training 2017) 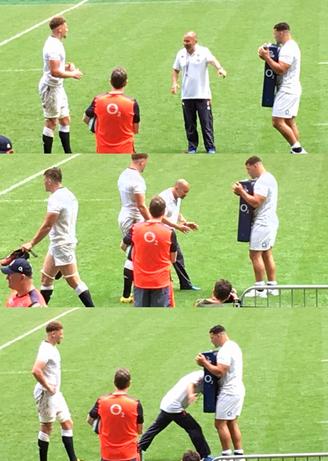 So how did Eddie Jones give England the edge that they needed?

To answer this I set about researching into Eddie Jones and the England team’s methods. I also (in the name of research of course!) attended all four autumn international England games at Twickenham vs South Africa, Fiji, Argentina and Australia. These were the four main points I believe can be transferred into the world of work:

1.     Set clear targets and aims for both the whole squad and individual players.

On the wall of the England Training Arena they have put the “Road to Japan 2019”. This lays out for the whole team and coaching staff the targets and aims for each year up until the next World Cup. This ultimately results in winning the world cup! The year they are in is clearly highlighted so everyone has no doubt where they should be at that particular time. Jones wants England to peak in September 2019.​ Individual players are also set objectives and if they are dropped they know exactly what they have to work on with their club team. Jones made it clear that if they achieved these objectives then they would be considered for the squad again, no one is written off.

This gives everyone a clear message of where they are heading and what the team wants to achieve.

Eddie Jones made it clear that he doesn’t want any superstars and for England to work as a team. By picking three vice captains in Mike Brown, Owen Farrell and Billy Vuniploa he has shared the responsibility across the squad and made players step up by not only showing faith in three players but showing other players that there are other ways of progression possible.

3.     Kept the team structured and the message simple.

When interviewed by Sky Sports after the autumn internationals Eddie Jones put an emphasis on how he drilled into the team to keep playing in a structured way and that remembering the game plan was key. Even when they went down to fourteen men after five minutes against Argentina, the game plan had to adapt but the players kept a clear head as they still knew the structure of how they were meant to play and what was expected of them.

4.     Maintained a positive attitude within the camp which then transferred across to the fans.

The message in the England squad is clear and positive, they want to be number 1 in the world. Jones says that the more you talk about it the more the players and supporting staff believe it. He also mentioned that when he came in after the disappointing world cup campaign he didn’t want to talk about the past and focused on the future.

It was also interesting to compare the attitude of the fans from watching games Lancaster had led compared to Jones. The atmosphere felt more confident and this I feel must have empowered the team further, a sixteenth man if you like. It was almost as if Jones had coached the fans as well through TV, media and results on the pitch. Much like customers, shareholders and clients of a business, the more the Company portrays a positive attitude the more everyone else believes in it and wants to be a part of the success.

In conclusion it is clear that Eddie Jones shows us that communication is key and the message from the top must be clear, simple, honest but positive. Employees who know where they stand and are empowered in a clear structure can focus and achieve successful results bringing their customers with them.

Pictures were taken from when after writing this blog Nick went to see the England Rugby Team train before the tour of Argentina in 2017. Please ask permission before you use!

Jones’s playing career had been fairly unremarkable but he had excelled since going into coaching, having been in charge of Australia between 2001 to 2005 and acted as a technical advisor to South Africa during their 2007 winning world cup campaign. He had more recently taken underdogs Japan through a hugely impressive 2015 World Cup and England supporters had high expectations.

Being in the crowd at the England vs Uruguay game (tickets had gone down from £250 to £50 who can blame me!) no one would have thought this would be the start of a 14 game unbeaten run which would equal the record set by the England World Cup winning side of 2003 beating Australia (the team that ultimately knocked England out of the 2015 World Cup!) four times on the way.

On Saturday England beat New Zealand in the Rugby World Cup semi final to reach the final. As we build up to the game, which will be held at the Nissan Stadium in Yokohama this weekend, we re-visit a blog written by HR Strategy Pro's Co-Founder Nick Butcher from the end of 2016. At the time England go on an unbeaten run of 14 game unbeaten run, which equalled the record set by the England World Cup winning side of 2003, unthinkable for a team that the year before couldn't get out of their group for their home World Cup. In the blog, Nick looked at the first year of Eddie Jones' reign as England Coach and how he had come in and implemented the initial impact and change. It's interesting to revisit this first year and see where the team was at this point as the next 3 years has been a true journey with its highs and lows, which has also seen rivals such as Ireland and Wales come and go. However, no one can argue that on Saturday we saw a team where all the elements of the last 4 years of Jones time in charge came together. Lets hope they can continue this against South Africa and the team complete the job he set out to do back in 2015!

We hope you enjoy looking back on this as much as we did!